In the visual-art form recreated the most vivid pages of the history of firefighting service in Russia. In the current year this work is reflected in a colourful wall calendar and booklet. 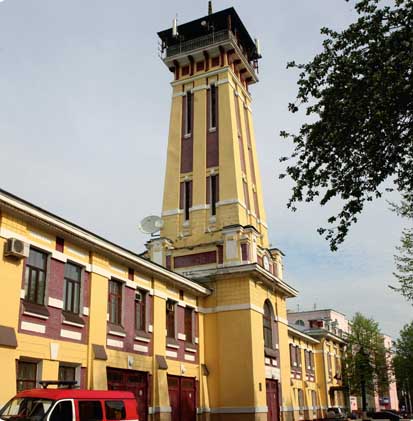 Utilitarian is essentially structure – the normal fire Department is like a powerful fortress in combination with the Palace in the art Nouveau style. The height of the tower is just over 30 meters. Steady hand of a master architect, century Sara to put her name in the architectural history of the city. Bright color contrasts, the perfection of the silhouette is impressively concise. 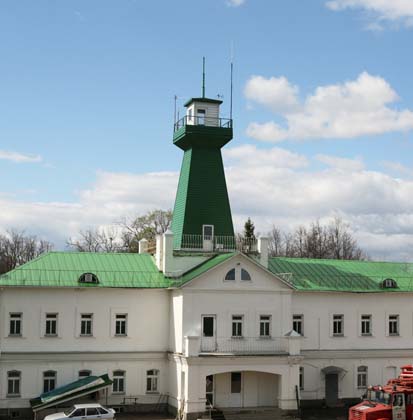 Those who gets to Suzdal, one of the jewels of the Golden ring, certainly catches the eye original, glistening with newness and the splendor of the white, under a white stone temples structure with a high tower – fire tower

Built in the early 20th century, the building of a fire station in Volgograd has become the pinnacle of engineering. The area of the new building the fire tower was very broad: there was 7 stations for the number of transports and a few stables. The second floor was occupied by dormitories, the barracks of firefighters with Shestov descent.

Years later after the destruction of the fire tower was restored using the famous Tsaritsyn bonded brickwork where the bricks set end. On the facade of the tower is preserved a unique version of the coat of arms of the County town of Tsaritsyn the end of the 19th century. 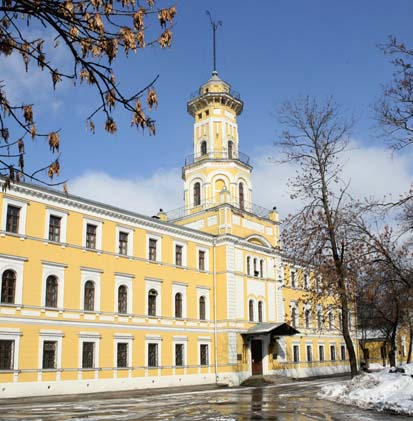 Building Sushchevskaya police station is a magnificent monument of 19th century architecture. It is notable for high fire tower with a platform for the spotter. Tower Suschevsky fire Department is one of the oldest and well-preserved in Moscow. In the main building housed the fire station, Telegraph, correctional facilities and administrative offices, the apartment ranks of the police. 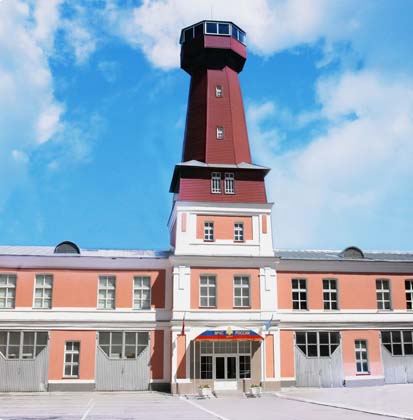 Historical and cultural significance of the building the fire tower in Kaluga is determined not so much its an original and interesting architecture, many unique history. This is even more important in Kaluga remained only one complex firehouse and then only partially.

In the last century by the Department of internal Affairs of the Kaluga region, the monks of the Optina Hermitage was donated to the city fire bell that the tower was notified about the fire. 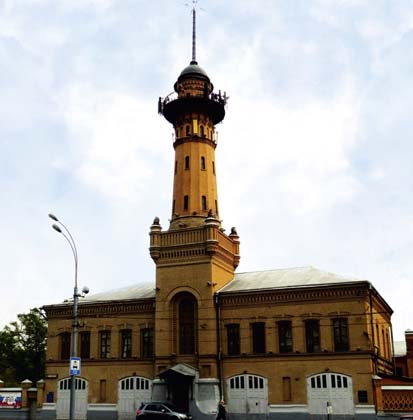 Red-brick fire tower on the former Sokolniki police station – the second time after the construction of the remaining Suschevsky in Moscow fire watchtowers. The upper part of the tower equipped pass gallery with openwork brackets. The spire is crowned with balloons - signs, who signalized to other firefighters about the fire. 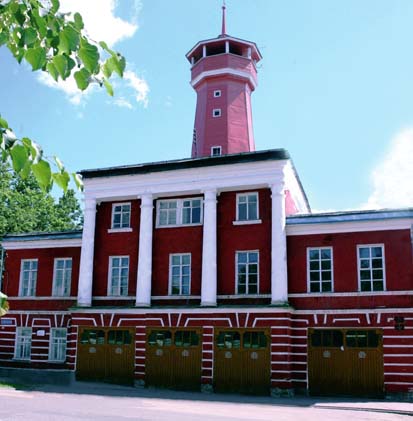 Exterior fire tower in the 19th century have given great importance. The development of the project their construction necessarily announced an architectural competition. In particular, the tender for the construction of the Uglich tower won the famous St. Petersburg architects of Italian origin, Luigi Rusca.

The building of Uglich tower on two levels with a mezzanine, decorated with monumental four-columned portico. On the lower floor under the portico in the 19th century were arched gate, through which exported fire-fighting equipment 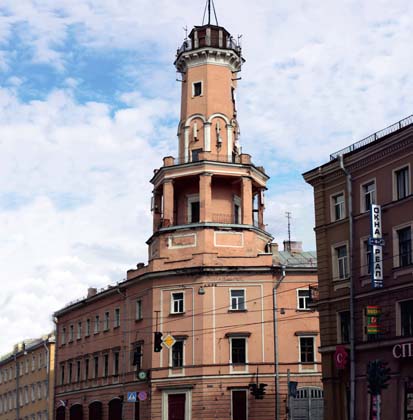 Octagonal fire tower in St. Petersburg shot up to a height of 46 meters . At the time it was considered one of high-rise landmarks of the city. The building of the tower mentioned in the novel of F. M. Dostoevsky's "Crime and punishment". In it the investigator Porfiry Petrovich led the interrogation of Rodion Raskolnikov. 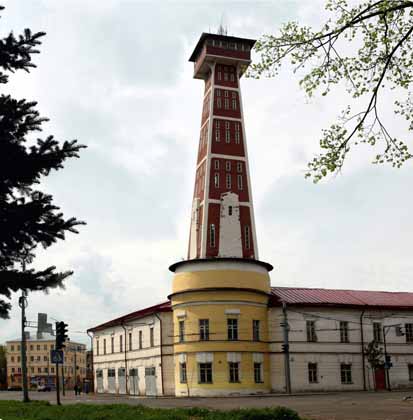 In 2012 he was one hundred years old fire tower in Rybinsk. To date, 48-foot fire tower in this city is the highest in Russia. Tower-hero of the day was built in August 1912, just over a year.

Fire tower in Rybinsk unique in its kind. It was built brand new for the beginning of the 20th century, the construction technology of reinforced concrete. 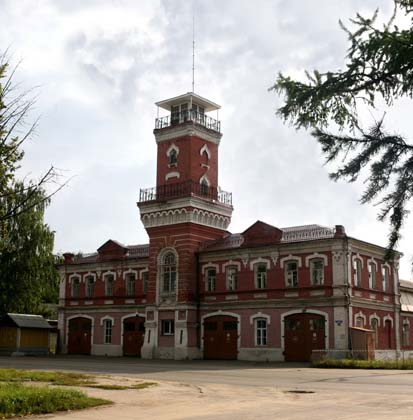 Locals in Kovrov always called this building the "fire castle". Of all the fire stations Kovrov of the Vladimir province fire station was considered to be the most significant. 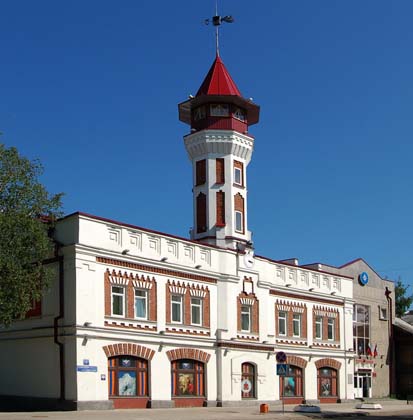 In September 1899 at the meeting of City Council was requested instead of the old dilapidated buildings of the fire service to build a new stone with rooms for the servants, stables, and an observation tower with a fire bell. A year later, construction began on the project Vologda architect, I. I. Pavlova. Until the fall of 1907 the building was finally completed and on October 19 held a prayer service on the occasion of the placing of the fire service. On the facade of the tower was located chimes. They played a song dedicated to Syktyvkar. It's safe to say that the building the fire tower is not only a monument of architecture, but also the unofficial symbol 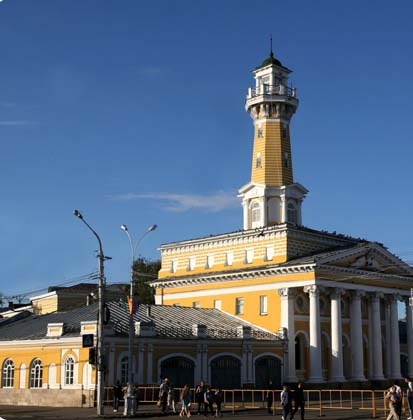 Fire tower in Kostroma – a unique architectural monument of the classicism epoch. It is located on the main square, named after Ivan Susanin, and is a high-rise dominant. In 1834 she aroused admiration I have visited in Kostroma with visit of Emperor Nicholas I, after which it has been the glory of the best fire tower of the Russian province. Fire tower built on the idea of K. I. Baumgarten – Governor of Kostroma, who decided that she was "on the one hand, will delight the eyes because of its aesthetic value, and on the other would keep the townsfolk from fire situations". 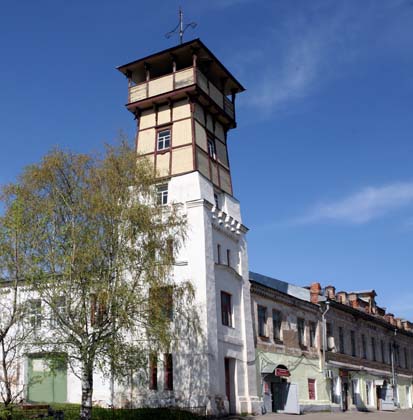 the town of Tutaev. Fire tower, the beginning of the 19th century the Architect is unknown

Perm Krai. The fire tower of the 19th century