The company "Spotvi" since 2002, professionally works in the market of manufacturing and supplying of fire-technical and emergency-rescue products, and during this time the products under the trademarks "Spotvi and Pozhtekstil" became known in Russia and abroad.

The company is located in the territory of the Eastern administrative district of Moscow, which is widely known to experts in fire and just lovers of Antiques the most beautiful building of the Sokolniki police and fire station with a tower-the tower 1881 -1884 years of construction. This building still serves its noble purpose, for there is fire station No. 12 for the protection of Moscow.

This historical monument and inspired us to the idea of collecting and studying materials on the most interesting historical buildings, fire stations, including fire tower built in the XIX - early XX century.

Noting the enduring interest in this topic from the professional workers of fire protection, as well as pursuing the promotion of fire safety, we have undertaken work on the development and implementation of the educational project "Fire-tower of Russia." On the basis of our company materials decided to create a series of wall calendars and booklet outlining the concept of the project, the location of the photographs with information on the history presented firehouses.

The fire tower is an integral part of the panorama of the ancient Russian cities. The watchtower began to be erected from the late eighteenth century As a rule, the tower was crowned with a two-storey building police stations, which originally housed a fire brigade. Active construction began in the early nineteenth century after the decree of Alexander I "On the addition with the inhabitants of Moscow duty to put fire Ministers, and the establishment thereof in the fire brigade", and continued mainly in large cities up to 30-ies of the last century. In addition to the patrol service tower was used for signaling: posted on the watch-tower leather signal balls in the daytime or the lights at night were notified neighboring fire departments on the size and location of the fire.

One of the most active participants of the project "Fire tower" is a newspaper photographer Gennady Smirnov, a member of the international Association "Union of designers" and the International Federation of journalists is known...
январь 2016 г.

This year we visited Saint Petersburg, Yelets, Vologda, Perm and many other cities of our country, reflecting historical culture in a colorful calendar for 2014
январь 2014 г.

The company "Spotvi" and "all-Russia voluntary fire society" continuing education project "Fire-tower of Russia." This year presents a historic building the fire tower in Samara, Syktyvkar, in a number of cities in the...
январь 2014 г.

In the visual-art form recreated the most vivid pages of the history of firefighting service in Russia. In the current year this work is reflected in a colourful wall calendar and booklet.
январь 2013 г.

The company "Spotvi" takes orders for new calendars "Fire tower Russia" 2018. This edition 2018 is different from the other release with its unusual format. On each calendar page you can see the first photograph from life the...
0000 г.

Press about the project

For 4 years our country successfully implemented an educational project on the history of fire. Thanks to the initiative of enthusiasts and scientists themselves "firefighters", assembled a unique archive of historical photos and documents...
0000 г. 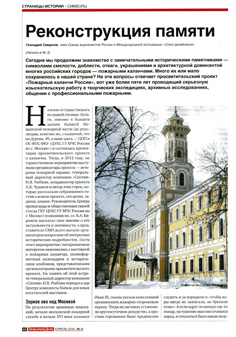 Today we will continue acquaintance with a remarkable historical monuments – symbols of courage, valor, bravery, ornaments and architectural dominant of many Russian cities – fire-tower.
0000 г.